A7FL’s growing popularity has attracted top former high school and college athletes, which has elevated the competition level to new heights. With the 2021 season fast approaching, here’s an introduction to a few of our young stars to keep an eye on this season. 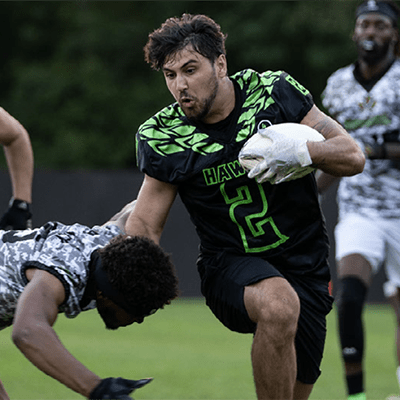 You simply cannot talk about the best running backs in the A7FLwithout including the name Mike “Sweetness” Liberti. The former Sayreville High School (NJ) running back draws comparisons to Saquon Barkley, and if you take a quick look at his highlight reel, the resemblance is clear.“I see myself more as that type of player that can line up and run between the tackles, but also line up as a wideout and run routes just as crisp as any receiver,” said Liberti.

At Sayreville, Liberti racked up over 2,500 yards rushing in two seasons, along with being a three-year starter on defense. The standout earned NJ All-State and Group 4 honors during his career. Despite a Division I scholarship offer, Liberti would go on to play for Rowan University but ended up leaving school early to take up a job at a warehouse company to pay off student loans.

But the desire to compete and test his skills was still there (the famous “itch” felt  by many A7FL players). So Liberti took up rugby for a brief period,, but soon thereafter he received some big news that would help revive his football career. “I was coached by and know some of the guys who were in the A7FL,” Liberti said. “So one day they needed an extra guy, and the rest is history.”

Since joining the league, Liberti has fully embraced the “street football” aspect of the A7FL. “In general, the A7FL gives me that backyard smash-type of football I crave and it gave me another shot to make a name for myself,” Liberti commented. “I joined because I grew up playing backyard football, which made me fall in love with football.

The A7FL’s normal spring schedule (including not playing on Mother’s Day or Father’s Day) allows its players to manage their football career, jobs, school and personal life. Liberti appreciates this flexibility although he isn’t working currently due to the pandemic. “It’s easy to balance since all the games are on Sunday,” Liberti said. “I tell every job I do that I can never work Sundays since that’s the day for football.”

The New Jersey Hawks have used Liberti as a hybrid back, lining up as running back or a slot receiver in their offense. His quick and decisive cuts as a running back allowed him to hit open running lanes with ease. He can also run through contact (and given the size of some of the defensive players in the league, that’s no easy task).

As a slot receiver, Liberti is capable of both outrunning defenders as well as leaping to make catches over taller defenders. Even though he’s not the biggest guy on the field, his athleticism makes him a constant threat to score.

Scoring was something that he had no trouble doing last season. In 4 games, he racked up 190 yards rushing on 34 carries with 2 touchdowns. On the receiving end, he tallied an additional 2 touchdowns on seven receptions for 83 yards.

Liberti was an integral piece of the Hawks’ run to the A7FL title game last season, where they ended up falling to a juggernaut Paterson U squad. According to Liberti, the loss has only put a chip on both his and the team’s shoulder.

“My competitive nature is known and heard for sure,” Liberti said. “This team has the same underdog but fierce mentality. The loss [against Paterson U] was heartbreaking, but nothing is sweeter than revenge. Stories aren’t written with only one chapter; we still got some stories to tell.”

Make sure to tune in on April 11th for the start of the A7FL 2020 season, and follow us on social media platforms for more American 7s news and highlights.